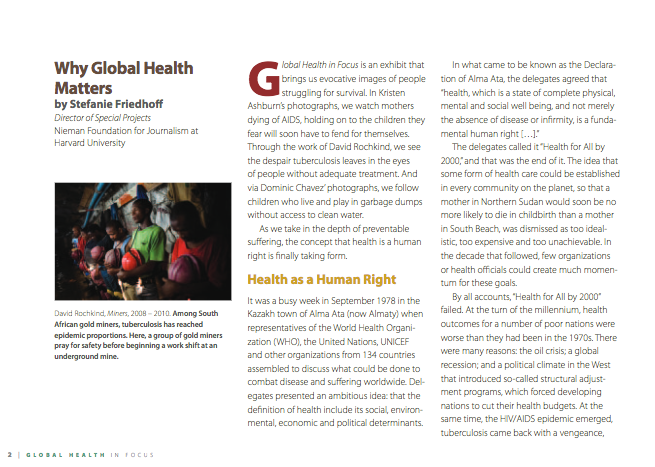 There’s a great exhibit,  “Global Health in Focus” at Boston’s Photographic Resource Center (just featured in the Boston Globe and running through March 24.) Join us for a panel discussion on the subject on Wednesday, March 7, 2012, 6:00 pm, at the BU George Sherman Union Conference Auditorium, 775 Commonwealth Ave, Boston.

Here is an essay I wrote for the exhibition catalog:

Global Health in Focus is an exhibit that brings us evocative images of people struggling for survival. In Kristen Ashburn’s photographs, we watch mothers dying of AIDS, holding on to the children they fear will soon have to fend for themselves. Through the work of David Rochkind, we see the despair the wasting of tuberculosis leaves in the eyes of people without adequate treatment. And via Dominic Chavez’s photographs, we follow children who live and play in garbage dumps without access to clean water.

As we take in the depth of preventable suffering, the concept that health is a human right is finally taking form.

Health as a Human Right

It was a busy week in September 1978 in the Kazakh town of Alma Ata (now Almaty) when representatives of the World Health Organization, the United Nations, UNICEF and other organizations from 134 countries assembled to discuss what could be done to combat disease and suffering worldwide. Delegates presented an ambitious idea: that the definition of health include its social, environmental, economic and political determinants.

In what came to be known as the Declaration of Alma Ata, they agreed that “health, which is a state of complete physical, mental and social well being, and not merely the absence of disease or infirmity, is a fundamental human right […].”

The delegates called it “Health for All by 2000,” and that was the end of it. The idea that some form of health care could be established in every community on the planet, so that a mother in Northern Sudan would soon be no more likely to die in childbirth than a mother in South Beach, was dismissed as too idealistic, too expensive and too unachievable. In the decade that followed, few organizations or health officials could create much momentum for these goals.

By all accounts, “Health for All by 2000” failed. At the turn of the millennium, health outcomes for a number of poor nations were worse than they had been in the 1970s. There were many reasons: The oil crisis; a global recession; and a political climate in the West that introduced so-called structural adjustment programs, which forced developing nations to cut their health budgets. At the same time, the HIV/AIDS epidemic emerged, tuberculosis came back with a vengeance, malaria cases increased, and the focus quickly moved away from basic health infrastructure to the management of disease emergencies.

In the 1980s and ’90s, overall resources for health diminished and interventions were designed to be selective in order to remain affordable. For example, it was believed that treating multidrug-resistant tuberculosis (MDR-TB) in low-income countries the same way it was treated in developed nations–via aggressive but expensive second-line antibiotics–would be too costly. As a result, drug-resistant TB spread across several continents and turned into a much bigger and costlier challenge.

What is Global Health?

As industry, technology, and the global spread of AIDS have made our world a much smaller place, our shared humanity becomes harder to deny. In recent years, the proposition that health is a social justice issue—one that enables all other development, from the healthy growth of individuals to economic productivity to national stability—has not only been recognized as visionary, it forms the backbone of the ongoing historic efforts we now call global health.

The term is fairly new—the field used to be called international health—and the change represents this new worldview. Global health today moves beyond infectious diseases in developing countries to focus on all health challenges, everywhere. It promotes comprehensive care and local empowerment. It asks for cooperative actions and solutions, not mandates for developing countries. It asks for shared responsibility for our shared welfare.

The challenges illustrated by the photos in this exhibit are daunting:

While the health of the world’s population has improved dramatically in the past century, the bounty has not been shared evenly. Roughly 90 percent of the world’s healthcare resources are used by only 10 percent of the world’s population. In Angola, 175 out of 1,000 children die in childbirth; in the United States, that number is 6.6. Similar to HIV/AIDS and tuberculosis, malaria predominantly infects people in low-income countries, and it kills about one million annually. Developing nations today also see a rise in chronic illnesses, such as cardiovascular diseases, diabetes and cancer.

Global health matters because to this day, millions of people die from preventable diseases simply because they are poor; malnutrition, combined with unsanitary or crowded conditions and a lack of vaccinations, medication and care, leaves them exposed.

Children are especially vulnerable: in 2010, 7.6 million children under the age of five died, a majority of them from curable diseases such as diarrhea, measles and malaria. The number is down from 12.4 million in 1990, which proves that some interventions are working, such as the distribution of bed nets that protect against malaria or the invention of a simple solution of salts, sugars and water that prevents dehydration from diarrhea. But too often effective prevention and treatment do not reach communities in need.

Such failures reveal our fragility. In 2007, Oswaldo Juarez moved to the United States from Peru to study English. First came the fevers and the wheezing fits. Then he started coughing blood. Several doctors had to be consulted before it became clear what was wrong with Juarez: he had tuberculosis. Not just simple tuberculosis, not just multidrug-resistant tuberculosis (MDR-TB) or extensively-drug-resistant tuberculosis (XDR-TB) – but XXDR-TB, a strain never before seen in the United States and untreatable with common antibiotics.

Juarez spent nearly two years in a Florida sanatorium, isolated from friends and family, undergoing a risky treatment of chemotherapy and other drugs, as Margie Mason reported for The Associated Press in 2009. Mason was a Nieman Fellow in global health reporting; her Nieman reporting project on global drug resistance led her to discover the case that the public had been unaware of until then. Juarez walked out of the hospital alive, but experts like Dr. David Ashkin, medical executive director of the State TB Hospital in Florida, told Mason, “He is really the future. These are the ones that we fear because I’m not sure how we treat them.” XDR tuberculosis killed 52 of the first 53 people diagnosed with it in South Africa a few years ago.

It is examples such as this one—or the rapid spread of the highly infectious SARS virus in 2003 from Hongkong to Taiwan to the U.S. and Canada—that illustrate how health challenges threaten not just the poor but everyone, everywhere.

Global health matters because in our co-dependent economies, with shared resources and a shared biology, our lives have never been more intimately intertwined. In fact, if a disease agent such as the one that caused the 1917/18 influenza pandemic would hit the world today, there would be no food deliveries within a few days, no medical drugs (most of which are imported), and almost no nation would be able to come to another’s rescue as they would all be responding to the emergency at the same time.

As smart phones have taken hold in the developing world, virtual conversations are everywhere, connecting people through their shared interests rather than their economic circumstances. The Internet, social media and increased travel all create an awareness of the stark disparities that exist in the world, and with that bring, especially to a younger generation, a renewed desire to do the right thing, to make a difference in the world.

The Harvard physician and historian of science Jeremy Greene says that in recent years, “Global health has become a visible and apparently universal good for our times, a moral imperative that has captured the imaginations of many around the world—albeit often to quite different ends.” As a result, there is a striking mix of players in the field today. Health ministers, evangelical missionaries, human rights advocates, military generals, teenage social entrepreneurs, neo-liberal and progressive economists, medical anthropologists, epidemiologists, WHO bureaucrats, and pop and movie stars all find common ground in global health.

The many agendas that come together—from national security concerns to empathy and altruism to the promotion of economic stability to the desire to export democratic ideals, including fairness and equality—have enabled health to move from a back burner issue to center stage. Worldwide financial assistance from developed to developing nations, for example, more than tripled recently, from $7.6 billion in 2001 to $26.4 billion in 2008, with most of the increase going to health-related interventions.

Also, 30 years ago there were only three major international bodies designing international health policies and projects—WHO, the World Bank and the International Monetary Fund—as well as a few key non-governmental organizations. Today, there are thousands of Non-Governmental Organizations of all sizes plus several new big players, from the Gates Foundation to the Global Fund to Fight AIDS, Malaria and TB. To put this in perspective: The Gates Foundation’s annual global health budget recently surpassed that of WHO.

While the year 2000 did not bring health for all, it did bring another major conference and another visionary proclamation: The Millennium Development Declaration and its eight goals, which aim to broaden the ideal of fairness and equality to all parts of human life, including nutrition, health care and education as well as infrastructure and social, economic and political rights.

If nothing else, the Millennium Development Goals (MDGs) brought home the Alma Ata wisdom that everything is connected, and that challenges in health can not be addressed without understanding economic, political, social and environmental challenges and vice versa. Slow progress on the MDGs over the past decade also has put the focus back on primary health care for all—and the right time for a visionary approach has finally come.

“Today, primary health care is no longer so deeply misunderstood,” says WHO director-general Margaret Chan. In an essay published in the British medical journal The Lancet, [The Lancet, Volume 372, Issue 9642, Pages 865 – 866, 13 September 2008] she explains that primary health care honors the resilience and ingenuity of the human spirit and makes space for solutions created by communities, owned by them and sustained by them. By offering a way to organize the full range of health care, from households to hospitals, with prevention equally important as cures, Chan concludes, “Primary health care increasingly looks like a smart way to get health development back on track.”

The Role of Photojournalism

The photographs in this book take us on a tour of some of the world’s most persistent health problems. They remind us that whenever we see a statistic or discuss health and development, there are real people behind the numbers and debates.

As the global health community struggles to learn from the past and make good on its goals, these images ensure that a broader public is connected to the historic effort. Ashburn, Chavez and Rochkind ask us to witness individual stories and the profound impact unhealthy living conditions and the lack of access to health care have on people and their lives. They ask us to acknowledge and to care.